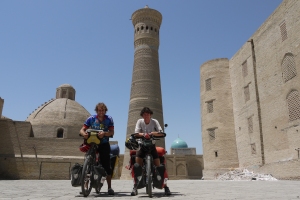 Since Turkey we have been following the ancient silk routes to China which for centuries have brought prosperity to the towns and cities that lie along it. Desert camel trains taking all kinds of eastern commodities such as silk, satin, hemp, musk, spices, medicines, jewels, glassware and even rhubarb would pass along these silk roads through the treacherous desert and mountain passes to Europe. Today these ancient routes have given way to the main highways connecting China, Central Asia and Europe. Many Silk Road trading cities where money wielding merchants would stop to sell and exchange their goods are still standing. Lucky for us our route happened to pass through two of the most famous of these cities, Bukhara and Samarkand in Uzbekistan, here lofty Minarets, grand Mausoleums, and impressive Mosques dominate the skyline. 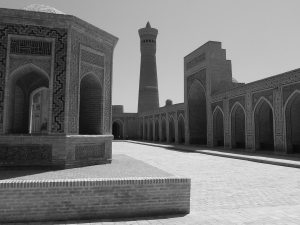 My first experience of Uzbekistan was sunstroke; we had got but 10km into the country when I fell foul to such a bad bout of sunstroke I could not move. It was a scary four hours of nausea and sickness which will not be repeated. We arrived in Bukhara after one days cycling from the Border and were immediately struck by the beauty of the city. There were old stone buildings connected by winding cobbled pathways, many mosques with tall Minarets and grand Mausoleums. In the centre of the town a turquoise pool surrounded by mulberry trees, cafes and restaurants was where we decided to stay.

Samarqand was the second city we passed through and the second largest city in Uzbekistan after the capital, Tashkent. This ancient Silk Road served as the centre of Amir Temur’s empire in the late 1300’s and early 1400’s. The rich history of the city has meant that there are many sights of interest for us to explore during our three day stay. 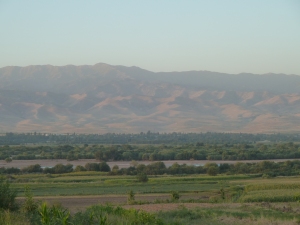 The Uzbek landscapes we cycled passed were a stark contrast to the baron dust mounds of Iran and Turkmenistan. The land was well irrigated and very green, the greenest we had seen since western turkey. There were vast fields of cotton growing on both sides of the road for as far as the eye could see. This cotton monoculture was set up during Soviet times as a means to further the Soviet textile industry. The very thirsty cotton crop in Uzbekistan and also Turkmenistan has been partially responsible for the Aral Sea Environmental disaster. The quantities of water required for such thirsty crops in an otherwise desert environment have been taken from Syr-Darya and Amu-Darya Rivers which no longer make it to the sea. Consequently the sea is now less than 25 per cent of its original size and the once prosperous fishing towns along the Sea have been left miles from the water. The reduction in the size of the sea has caused the salinity to increase and few fish remain.

It was interesting to see the lush trees and crop filled valleys but knowing at what environmental cost this cotton has come to be, left us with a sombre feeling. Never the less the numerous shady trees did provide much needed leafy shelter that had been absent in the previous countries.

Outside of the larger towns and cities we were constantly hampered by hunger. After getting ill from the small road side restaurants in Turkmenistan we were going to be taking no risks. We also had a sneak peek into one of these kitchens, dirty dishes and swarms of flies feeding off the bits of food were everywhere. It was not surprising that we became ill after eating in these places. The national dish of the country which is actually pretty good is called Plov. Plov is a rice dish cooked with oil and carrots with pieces of meat, usually lamb or mutton. The locals believe that if you drink the oil and meat fat that remains in the pan after cooking Plov your libido will be improved. Judging by the size of most of the men here this fat drinking ritual is still practised, but improving their libido I highly doubt it!

Our experiences of the local people in Uzbekistan were yet again a positive one. People were very intrigued by us and as soon as we stopped we were immediately engulfed by crowds of locals asking questions and trying to get a better look at our bikes. Though, this friendly attention was not always welcomed by us. After a long slog on the bikes a ten minute break to eat a Snickers would have been preferable to entertaining the attention of hungry locals. 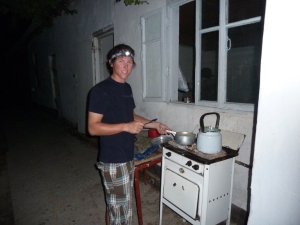 Finding ourselves in the city of Guilstan as night was falling we were compelled to knock on a local gate in search of shelter. The first house we visited invited us in, made us two beds on a carpeted floor, showed us the bathroom (a small outhouse containing a bucket of water and a drain) and let us use their cooker for our pasta dinner. Again we were baffled by the hospitality of the people here and admired their kindness.

Despite the many positive aspects of the country we couldn’t help feel there was something sinister lurking under the surface of this nation. Uzbekistan has had many instances of human right violations, namely the Andijon Massacre and the police here are all pervasive. There are road side check points everywhere in the countryside and it is even worse in the cities. Police stop anyone and everyone to check papers and find reasons to receive bribes. The constant police checks and the strict laws made us feel very uncomfortable and anxious at times. 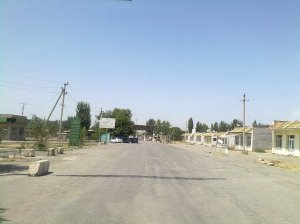 As a tourist we were required to register with the authorities every night. This is done only by the expensive hotels and solo registration was near impossible. Our mode of transport did not allow for this daily registration and on arriving in Tashkent we were informed of our error.  We learnt that the police can ask for proof of registration at any check point or at the border leading to a $1,000 fine per day unregistered. This was a frightening prospect and did not help our feelings towards the authorities. Despite our heightened paranoia and fear being checked, we managed to pass through the police control points and border without being asked to show our registration tickets. It was a massive relief to be out of Uzbekistan and away from the strictest police state we’ve ever experienced.