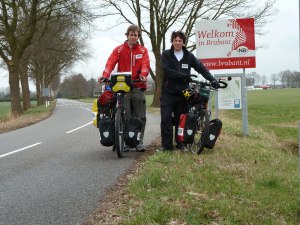 Finally we arrived in Holland, the land of wooden shoes, windmills, excellent cycle paths and enough holey cheese to drown a Bishop. Our first impressions were of shock, the road we were cycling on had changed from a two lane country road to a two lane cycle path and a one small lane for motor vehicles.

Our first night was to be spent couchsurfing in Tilberg at the house of Jos. Jos was a very friendly Dutch student who made us feel very welcome and comfortable in his attic room, and we spent the evening hearing about the cycle touring he had undertaken all around Europe. 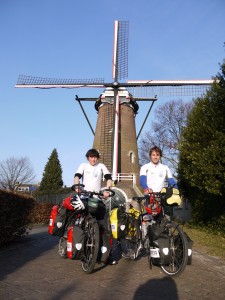 We cycled 52 miles to Weert, during our second day in Holland. We had arranged another couchsurf, but after only 15 miles we stopped for lunch at a windmill where we found internet. The source of the internet came from the house of Lieke, a lovely Dutch girl across the street. She had noticed us loitering around her house for some hours with laptops and so she came out to inquire about our intentions. Once we had explained ourselves, she invited us in for drinks and cake and to finish our internet chores from the comfort of her garden.

We arrived in Weert slightly later than expected but with the website updated we felt greatly relieved. We were staying the night in the house of Rudy and Angela a lovely Dutch couple in their late twenties. On arrival we were presented with dinner, and what a dinner, by far the best meal we had eaten for a while (thank you Rudy and Angela). Rudy brewed beer in his spare time of which we enjoyed a few. 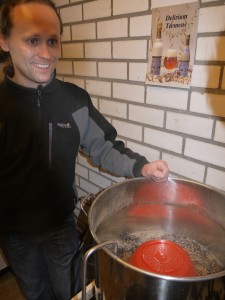 We visited Rudy’s small brewery before cycling off in the direction of Germany. After discussing how effective it was to just ‘’follow the compass’’ we found its weakness in its ability to detect rivers! We had to make quite a detour and by the time we reached the other side it was getting dark. That night we found a small farm to pitch our tents about 5km from Germany. The farmer appeared happy to accommodate and took us too the best spot. It truly was luxurious camping, with soft grass on the fringe of cluster of trees surrounded by farm land. 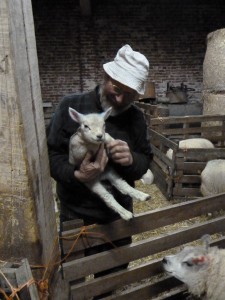 The following morning we learnt that two lambs had been born in the night and before we went on our way we had the opportunity to see and hold them. We thanked the farmer and his wife and headed into Germany.